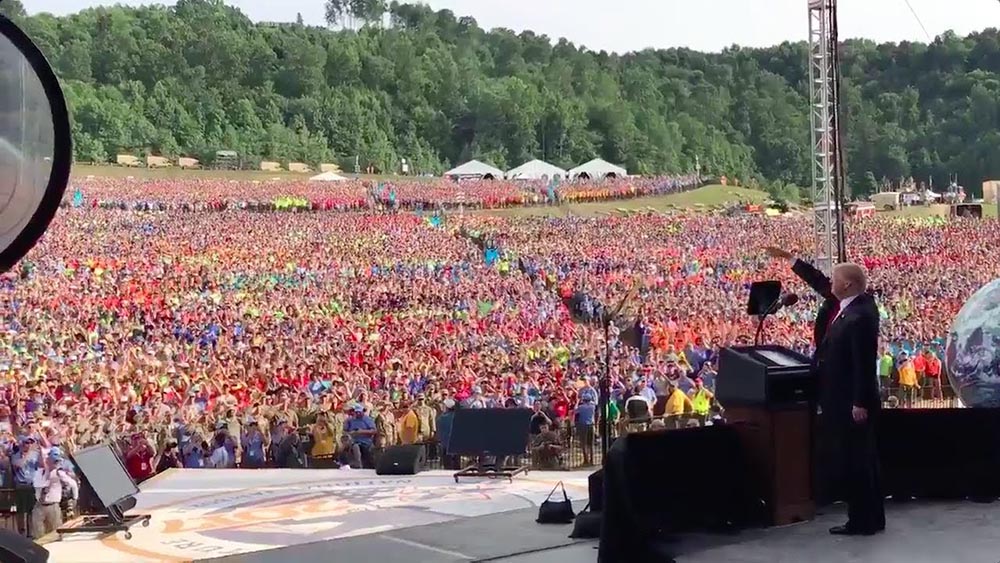 At this month’s Vulcan District Roundtable those of us who were on the Jamboree Staff were asked about the President’s visit to the Jamboree. We shared the same response. The following day we heard nothing from the Scouts and the Venturers about the visit. Very few Scouters did ask “what do you think about the speech” and the responses were the same… a shrug of the shoulders. Sixteen hours after the speech, everyone had returned to the activities of the Jambo and it was as if it never happened.

The following was posted on the Jambo Blog on July 24, 2017. It was written by J.T.Dabbs who was on the Jambo Media Staff and reprinted with his permission. His comments were excellent about the President. J.T. was on target with the salient points of the event. Our Scouts participated in an amazing lesson in American Politics.

As I have mentioned in a previous post, it is the tradition of the BSA to invite the sitting president to visit the Jamboree, some have accepted some have not, from both parties. As most know, President Trump was invited to attend the 2017 Jamboree and accepted. This was an exciting event for the Scouts and Scouters. Trump delivered, the type of speech I expected, typical Trump, those that love him loved the speech, those that hate him hated the speech, and those in the middle rolled their eyes!

I don’t want to get into politics, but I will say a few things that I think need to be said and those that are demanding the BSA to apologize for inviting trump. Here are what I think are the key points:

2. The Scouts in attendance were treated to a true Trump speech, what a lesson in civics and the American way. Those that criticize the Boy Scouts in my opinion disrespect the office of the presidency, (see point #3 for clarification) the BSA and the great American tradition of debate, free speech and diversity of ideas. Hopefully, those scouts who did not like what they heard will get involved and work hard in the process to support a candidate that can run against Trump and beat him in the next election. Those scouts who like what they heard, should get involved and work hard to get Trump reelected. What an amazing lesson in American Politics.

Meet the Press Reporter Chuck Todd said it well in a tweet:

Please @POTUS don’t put the Boy Scouts in this situation. Keep politics out of the Jamboree. What a mess. Totally unfair to these kids https://t.co/lW7rwtF612