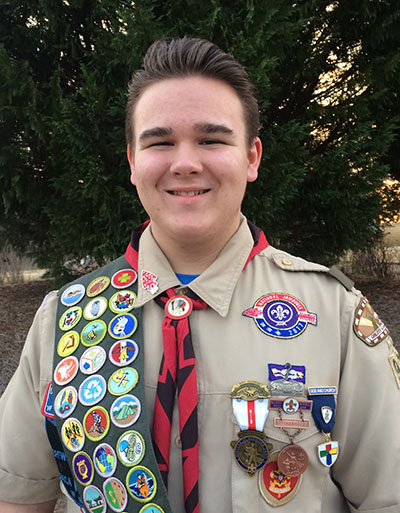 On February 9, 2017, Daniel Massie received the William T. Hornaday Badge in recognition of his significant contribution to conservation.

This awards program was created to encourage learning by the participants and to increase public awareness about natural resource conservation and to recognize those that have made significant contributions to conservation. It was begun in 1914 by Dr. William T. Hornaday, director of the New York Zoological Park and founder of the National Zoo in Washington, D.C.  After Dr. Hornaday’s death in 1937, the award was renamed in Dr. Hornaday’s honor and became a Boy Scouts of America award. The Hornaday Awards are highly prized by those who have received them: Approximately 1,200 medals have been awarded over the past 100 years.

Daniel, with the help of several volunteers, cleared a large area of land at the Moss Rock Preserve in Hoover by reducing the density and abundance of unwanted privet and undergrowth. After several months, Daniel returned to the area to evaluate the re-growth of the invasive species.  After the City of Hoover completes some additional work, the general public will be able to use and enjoy the area for recreational and educational purposes. In addition to completing this sizable conservation project, Daniel also completed several required merit badges.

Since 1971, Daniel is the second recipient of the Hornaday Badge in the Vulcan District.  Congratulations to Daniel for completing this conservation project and for receiving this prestigious national award.