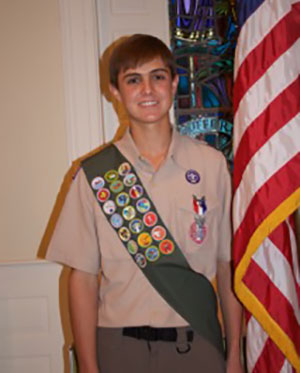 Haskins Williams Jones, Jr., of Mountain Brook, was awarded the rank of Eagle Scout in a Court of Honor on October 23, 2016. As a member of Troop 63 at Canterbury United Methodist Church, Jones earned 21 merit badges, served in leadership positions, and participated in service projects.

For his Eagle Scout leadership project, Jones built a fence and gate around a playground at St. Mark’s Episcopal Church in the Titusville neighborhood of Birmingham, providing a safe, enclosed area for the children of the church and community. The project took 185 hours to complete and used a total of 27 workers. Jones raised more funds than were needed for his project and was able to make a sizeable donation of the excess to St. Mark’s.

Jones is a junior at Mountain Brook High School, where he plays on the varsity tennis team and participates in school clubs. He is a member of St. Mary’s-on-the-Highlands Episcopal Church.

He is the son of Ann and Haskins Jones and is the grandson of Mrs. Carlisle Jones and the late Mr. Jones, and Mr. and Mrs. Newell Witherspoon.

If you have earned your Eagle rank and would like to post it on VulcanDistrict.com, download this flyer and it will give you all the information you need to submit your story to us.