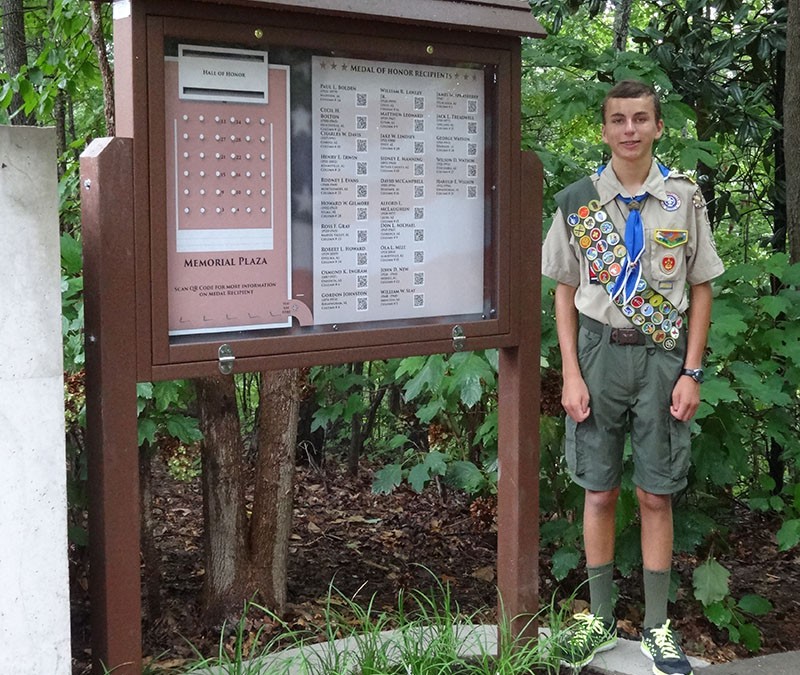 In July, Jonathan Dinkel of Troop 23 from Discovery United Methodist Church in Hoover, completed his Eagle Scout Service Project. His project was at the main entrance to the Memorial Plaza at the Alabama Veterans Memorial Park.  His project involved erosion control and beautification to the left of the entrance, and the installation of an interactive directory to the right of the entrance. The interactive directory depicts the 36 columns in the Memorial Plaza, where the 25 Alabama Medal of Honor recipients are honored with plaques describing their valor. The directory also contains the names of all 25 Alabama Metal of Honor recipients and a QR code that when scanned links to the National Congressional Medal of Honor database where there is additional information about each recipient. A meditation bench was also added to the beautification area.

Jonathan has earned 40 merit badges, has served as the Senior Patrol Leader, Assistant Senior Patrol Leader, Historian, and Patrol Leader. In 2014 he attended the first summer camp at the Summit Bechtel Reserve.  Last June, he successfully hiked 82 miles at the Philmont Scout ranch in New Mexico, and completed National Youth Leadership Training (NYLT) in July.  He will be attending Florida Sea Base June of this year and Northern Tier in June, 2017 to complete the Grand Slam.

Jonathan completed his final Board of Review for Eagle Scout on September 10, 2015.  His Eagle Court of Honor ceremony was held in November at the Alabama Veterans Memorial Park.

Jonathan is the son of Darrell and Rita Dinkel of Hoover.  He is a member of Prince of Peace Catholic Church and is a freshman at Hoover High School. Along with playing clarinet in the school band, he is a first violinist in the Music Opportunity Programs Birmingham Prelude String Orchestra.