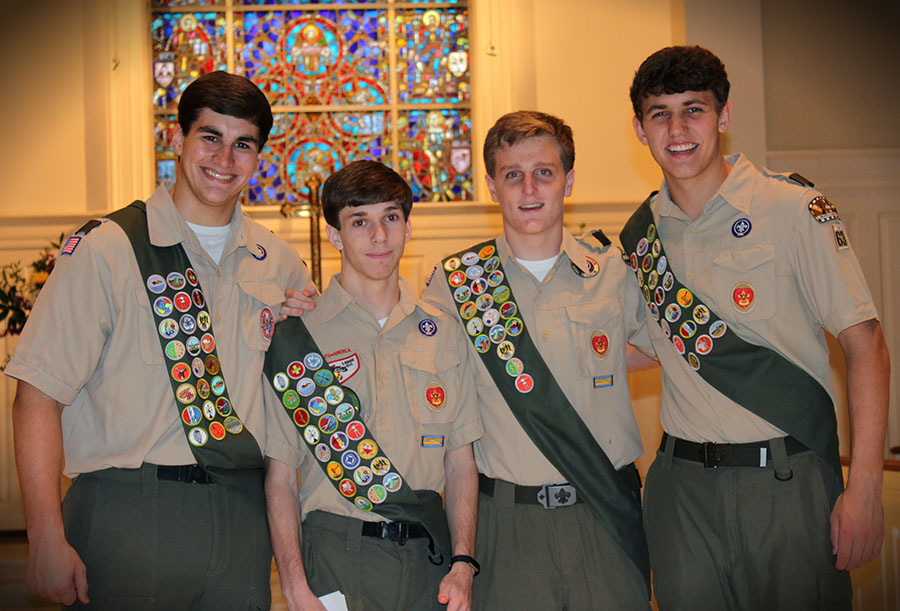 Will Carothers, the son of Stephanie and Russ Carothers, chose to restore and repair a playground and outdoor basketball court at Avondale Elementary School for his Eagle project. His project involved repairing the asphalt court, along with the goals and backboards, plus building new benches and repairing a gazebo. With much hard work, the area was returned to a useable and safe place for the children to enjoy. Carothers is a junior at Mountain Brook High School, with future plans to attend college and become an Orthopedic Surgeon.

Brian Barr chose to redesign and restore a lath house for the Fern Society at the Birmingham Botanical Gardens for his service project. As part of his project, he devised a new slanted design for the lath house’s shade cloth roof, incorporating a system of cables, eyebolts and turnbuckles. His new design will help eliminate the collection of debris, thus extending the life of the structure. Barr, the son of Cindy and Brian Barr, is a junior at Mountain Brook High School and plans to major in Engineering at college.

Jim Williams’ project for Glenwood Autism and Behavioral Health Center was to construct a walkway and floating dock for one of the lakes there. Dedicating his project to his cousin with autism, Williams’ dock will serve as a fishing pier, swim platform, and a place to launch and land canoes for the residents at Glenwood. The son of Gretchen and Jim Williams, he is a junior at Mountain Brook High School and plans to attend college and pursue an Engineering degree.

Paul Tyson is the son of Lissa and Marc Tyson, and for his Eagle project, he built a pavilion at the Alabama Environmental Council’s Birmingham Recycling Center in Avondale. Tyson’s pavilion design included a concrete floor, created from 1000 pounds of crushed glass, which had been recycled from bottles and glass that Tyson had collected. After graduation, Tyson’s plans are to attend college and pursue a Business degree.