No Burn Order Has Been Issued

TO ALL UNITS WITHIN THE GREATER ALABAMA COUNCIL

This ban includes all 22 counties in the Greater Alabama Council and applies to all unit campouts and council properties. 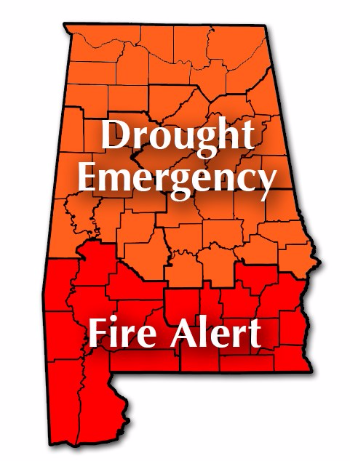 Governor Robert Bentley on Wednesday signed a Drought Emergency Declaration due to extremely dry conditions. The declaration often referred to as a ‘No Burn Order’, prohibits all outdoor burning for 46 counties in north and central Alabama. The order is effective as of 3:00 p.m., Wednesday, October 12, 2016.

“The current drought condition in our state is posing a serious threat for wildfires,” Governor Bentley said. “The continued lack of rain combined with low relative humidity and strong winds put us at a very high risk. This declaration is meant to prevent unnecessary burning, reducing the chance of avoidable fires.”

The Drought Emergency Declaration order will remain in effect until rescinded by the State Forester, at which time conditions will have changed sufficiently to reduce the occurrence and frequency of wildfires. To report persons burning in violation of this law, contact your local law enforcement.

More information can be found at http://www.forestry.alabama.gov/pr.aspx?ID=11839&sm=c_1