Training Knots and Where You Get Them 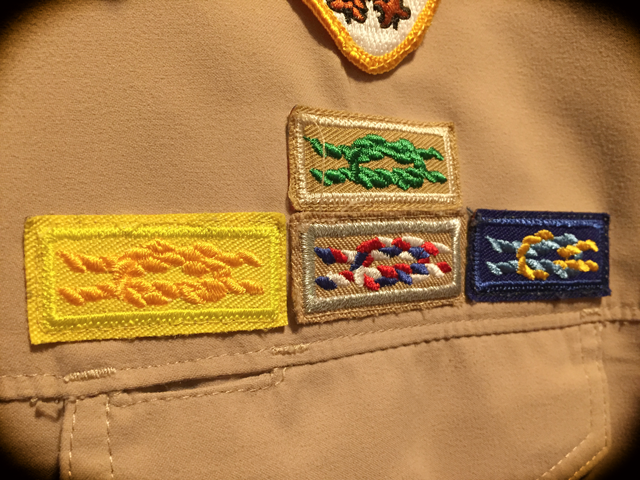 Have you ever wondered how scout leaders get those knot patches they wear above the left pocket on their uniforms? If you have, then you probably wonder what each one is for.

Most of those knots are training awards. They are earned by leaders who are fully trained in their position, meet a set of performance goals during a specific time period and attend University of Scouting or 4 roundtables during the year.

If you would like to see an overview of the currently available knots, as well as those that were retired in the past year or so, visit the U.S. Scouting Service Project knots page.

Training knots are submitted by the individual who will receive them. You can download progress record form at the Vulcan District Adult Training page. Once you have completed the requirements, you will need to have your form signed by the appropriate person. Then you send the form in to your District Executive. In Vulcan District, knots are presented at the Adult Leadership Recognition Ceremony at the end of January.

When you visit the U.S. Scouting Service Project knots page you will see other knots for bravery, support of scouting and honor awards. Scouters who receive these have been nominated. This brings up a good point. We have a great number of outstanding scouters who deserved to be recognized. Take a few minutes to look at the qualifications and see if there is someone you know who would be deserving of these honors.

Next are the religious awards. Both of these involve completing a program administered by P.R.A.Y. Publishing. Contact your religious awards coordinator for more information.

Finally we have achievement awards. If you have earned your Eagle, Arrow of Light any of the other awards as a youth, then you should wear these on your uniform. Pick up the ones you need at your local Scout Shop or on scoutstuff.org.

Hopefully you have taken a look at the qualifications and started to fill in the progress records. Maybe you are planning to nominate someone for a knot? Next step is to send them to Vulcan District Executive Michael Wells and get them there during the first week of January. Paperwork needs to be done before the Adult Leadership Banquet on January 22.

This years University of Scouting, which will now be known as Scouting U., is on March 14 and will be held at Wallace State Community College in Hanceville. If you have never been it is a great time and you will learn a lot. I encourage you to go. Information about Scouting U. will be coming out at the beginning of the year.

What are you waiting for? Start filling out those progress records.

The photo above is of my uniform. You will notice the knot on the bottom in the middle is for my Eagle that I earned as a Scout. The green knot above is the Scouters Training award. The two on the outside are both cub scout training awards that have since been retired. Scouters can still wear retired knots.