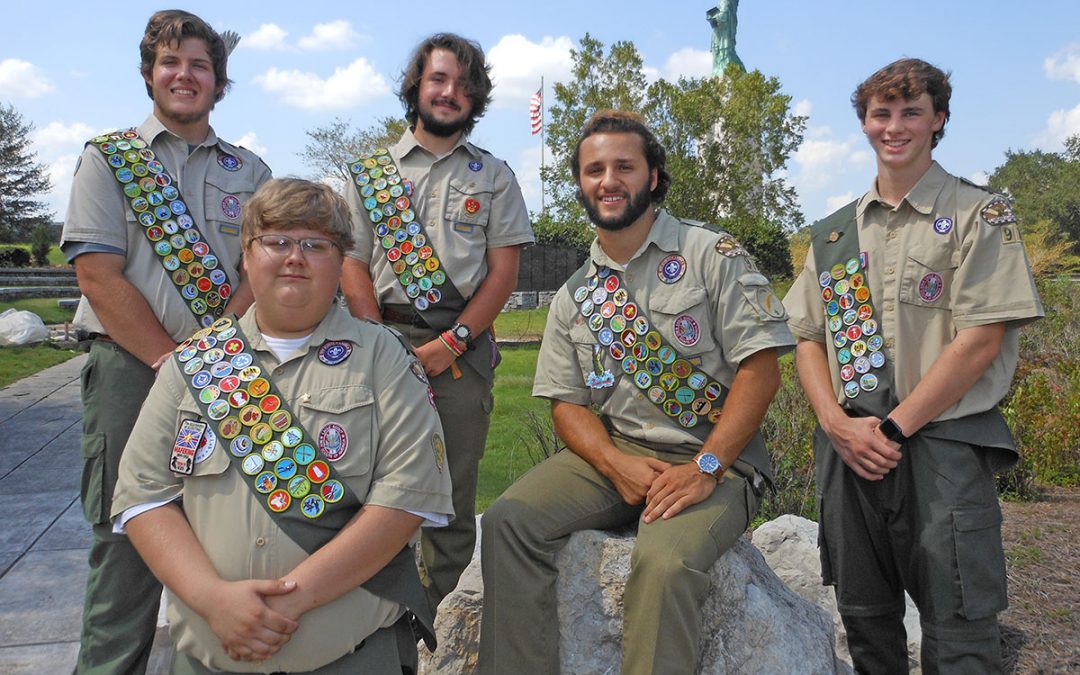 On Sunday afternoon, August 27, at Trinity United Methodist Church in Homewood, Troop 97 held a Court of Honor to recognize five of its members who, in the past few months, have achieved the rank of Eagle Scout. The Homewood based troop welcomed James Gunter, Matt Howell, Sam Kyle, Liam Melville and Camp Wilhelm into the “Eagles Nest”. These newest Eagle Scouts will join 230 previously inducted Troop 97 honorees into Scouting’s highest rank.

For his Eagle project, James Gunter raised funds to build five picnic tables for Patriot Park in Homewood. James had a fleur-de-lis brand created and used it to brand each of the tables. The tables were built, stained and delivered to the Park and are used by the Hall Kent Elementary School students when using the park for outdoor studies.

Matt Howell’s Eagle project was to build a Fire Pit and benches for Glenwood Autism & Behavioral Health Center, a vocational and residential housing for children and adults with autism.

Sam Kyle had the opportunity to make improvements to the Holy Rosary Catholic Church located in Gate City for his Eagle project. Sam installed a fifty-foot French drain to improve a drainage issue. In addition, he built a Little Free Library designed to look like the church and installed a proper Sacrarium drain for the Church.
Liam Melville’s review board showed great interest in his Eagle Project and was very impressed with the Chimney Swift tower he built at the Homewood Community Garden.

Camp Wilhelm’s Eagle project was to build and layout 19 trail makers for a 4.75-mile running trail at Red Mountain Park. Each trail maker is a 4×6 post with a metal plate with the Red Mountain logo.