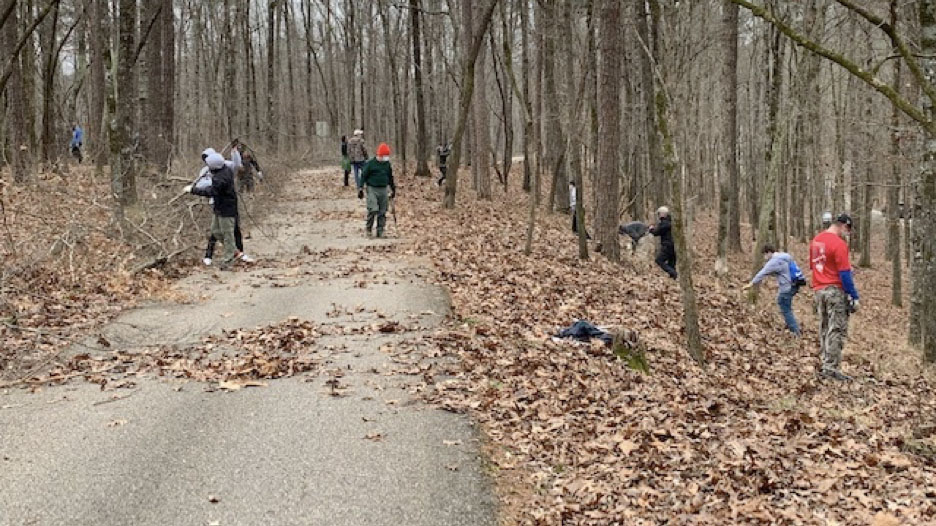 Early on a recent frosty morning, nearly 110 Scouts, Scouters, families and other adults, representing 13 units from Vulcan District, fanned out across Tannehill State Park to participate in the Vulcan District Annual Service Day. By early afternoon, BSA volunteers had cleared trees and brush along the under-utilized Tramway Trail at the Park’s entrance and the mile-long Tannehill Miniature Railway train track. All together, BSA volunteers accomplished nearly 450 hours of work.

Volunteers from Scout BSA Troops, Venture Crews and Cub Scout Packs came together to help out an important community asset. Not only is Tannehill historically important because of its furnace and Alabama Iron and Steel Museum, it is also holds special significance to local Scouts as the home of the annual Vulcan District Camporee.

Early morning started with the hum of chainsaws as Scouters and adults felled dead trees and large scrub trees. Scouts followed behind them to clear smaller trees and undergrowth that had built up over the years. Despite the cold weather and hard work, the most common sounds were banter and laughter as the Scouts worked together to bring the underbrush to the road for future removal by park staff. One father commented on how much fun he and his son were having together, as they don’t have many opportunities to clear brush and haul heavy stuff around. Several park visitors were delighted to see the Boy Scouts of America in action, commenting on how it brought back fond memories of their son’s, brother’s or father’s time in Scouting.

Brian Smith, Park Manager, expressed both his and Park Superintendent Lisa Carroll’s appreciation for the outstanding turnout and hard work of our volunteers. Smith said that the park would welcome any Scouts looking for Eagle Scout project ideas. He can be reached at briansmithtsp@att.net .

Legend has it that General George C. Marshall, though a graduate of VMI himself, once said that if he needed a job done, he wanted a West Point football player. For me, I’ll take a handful of the Boy Scouts of America’s finest.

To all of our volunteers – thank you and job well done. You did great work and left a favorable impression of who and what the Boy Scouts of America are today.