What is the Vulcan District? 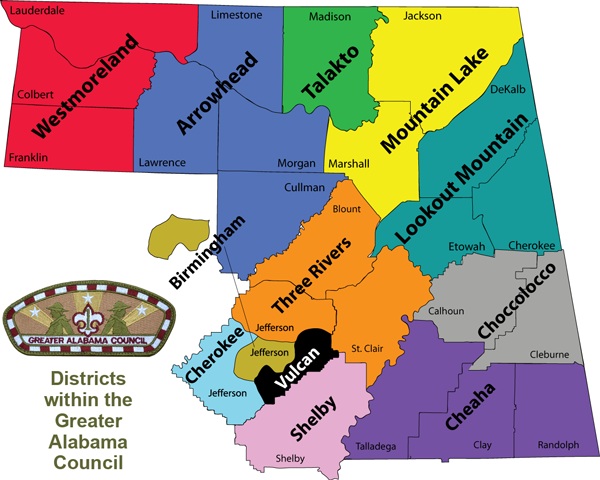 If you are a new leader or parent, you have probably heard the terms council, district and unit and you might not understand what they mean with all the other cub scout related items going on. Uniforms, popcorn sales, dens, packs, it can all be a blur. Let me shed some light on the Vulcan District.

The Vulcan District is roughly made up of the over the mountain communities in the Birmingham area. These include Homewood, Mountain Brook, Vestavia Hills and Hoover. There are twelve districts that make up the Greater Alabama Council. Some of the districts cover multiple counties.

The Greater Alabama Council is located in North Alabama and the east central part of the start as far south as Shelby, Talladega, Clay and Randolph counties.

To our west is the Black Warrior Council whose headquarters are in Tuscaloosa and the Tukabatchee Council is to our south headquartered in Montgomery.

If the council is made of districts, what are districts made of? Units. A unit is a Cub Scout Pack, Boy Scout Troop, Venturing Crew or Varsity Team. You will hear that term

So there you have it. Do you have more questions? Come to the Vulcan District Roundtable. It’s a great place to find out more about the district and scouting in general.